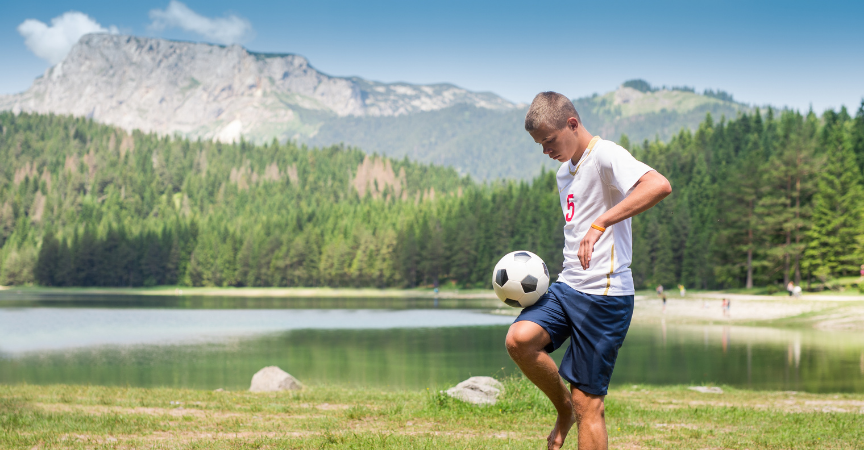 My life left the path of “average” when my father, a research chemist, received a posting in his company’s sales division in Geneva, Switzerland. I was eight years old at the time. My parents put me in the public school system. The kids and teacher spoke French, no English. When I misbehaved, the teacher pulled my hair; when I wrote messily, the teacher held up my sorry notebook for all the other kids to say “eewww!” But when I left the classroom, the teacher kissed me on the forehead. This was not how they did things in New Jersey.

We pupils practiced handwriting, spelling, and math in the classroom. The high point of instruction came at the end of the week, when we submitted to a “dictée,” the very-French spelling quiz: the teacher read a text, and we wrote it out, graded for both spelling and penmanship.

The high point on the playground was the daily soccer game, played on asphalt with jackets on the ground to mark the goals. About two months in, after more disorientation and tears than I had ever experienced, I emerged victorious in both arenas: I got the class’s only perfect score on the spelling test (sadly, I never excelled at penmanship; all the girls and most of the boys beat me there), and I scored my first goal on the soccer field. I learned that paying attention had its rewards, such as spelling as well as the kids who grew up with the language, and I learned that success required daring at the critical moment, because I couldn’t score a goal in soccer without taking the shot and letting the ball out of my control.

We stayed in Switzerland three years. I returned to this country with a love of language and learning, and the knowledge that I could succeed in unlikely situations.

I excelled in math, science, and language in high school. I went to Dartmouth College, spending four years with a fascinating mix of highly accomplished students. I started with the hard sciences, expecting to finish with a chemistry or math major. In my sophomore year, however, I changed my mind, and majored in government. I decided that rather than studying numbers and things, I needed to study people.

Why this change? My father had been the smartest high school senior in 1945: he won the national Pepsi-Cola scholarship competition by taking a nationwide test (this eventually became the PSAT) and scoring the highest out of 15,000 seniors taking it. He earned a full-ride scholarship to Princeton, got his Ph.D. in chemistry at Yale, and worked for Union Carbide, one of the great American corporations in the 1960s. And yet our family life suffered: my brother started marijuana as a 12-year-old, ran away from home at 15, and never became a fully-functional adult. My mother, a beautiful and brilliant woman, turned to Scotch whiskey to deal with her disappointments and fears. My father’s talent with hard science and numbers did not translate into personal thriving; intelligence did not lead straight to happiness.

I turned to law because of these experiences: I value learning, studying, disciplined thought, language, precise and expressive writing. I value good governance at all levels, including good and resolute conflict, from the family to the nation and the community of nations.

Taxation touches all of us. It shapes our economic choices, and it funds our government. But it does more than that. Paying tax is a way of participating in government. And because our government has condescended to express taxation in the form of laws, rather than brute force, it is where we most commonly learn the practical truth that we have a government of laws, not men. Tax collection is not administered by a man on a horse wielding a sword, but by bureaucrats constrained by statute and case law, who acquiesce in judicial decisions that they don’t like.

I am proud of serving, in my small way, this civilizing process, and thereby making our society a little better.