The vast majority of taxpayers who cannot fully pay their federal taxes set up an Installment Agreement with the IRS, whereby they make agreed-to monthly payments to the IRS, over a period of up to six years, to pay off their back taxes. Contrary to the breathless ads that flood the radio and television airwaves, from tax relief companies promising to settle with the IRS for “pennies on the dollar!!!”, the IRS almost never reduces or forgives a final tax bill. Recall that you are in the IRS Tax Collection part of this website: this section focuses exclusively on how to pay the IRS what’s owed.

If you’re reading this section, then the time for disputing the amount owed is over. The IRS concluded its audit and issued a final amount owed, or you took the IRS to Tax Court and the tax judge issued her final determination on tax owed, or you ignored all prior IRS notices and they’re about to levy on your wages or bank accounts. The Collections division of the IRS is mandated by Congress to go after you for what you owe, with all the power and resources of the federal government. The IRS has given you several chances to dispute what’s owed; now it’s coming for what’s owed, even if you still disagree with that number. What now? How do you pay the IRS when you don’t have the money to do so? 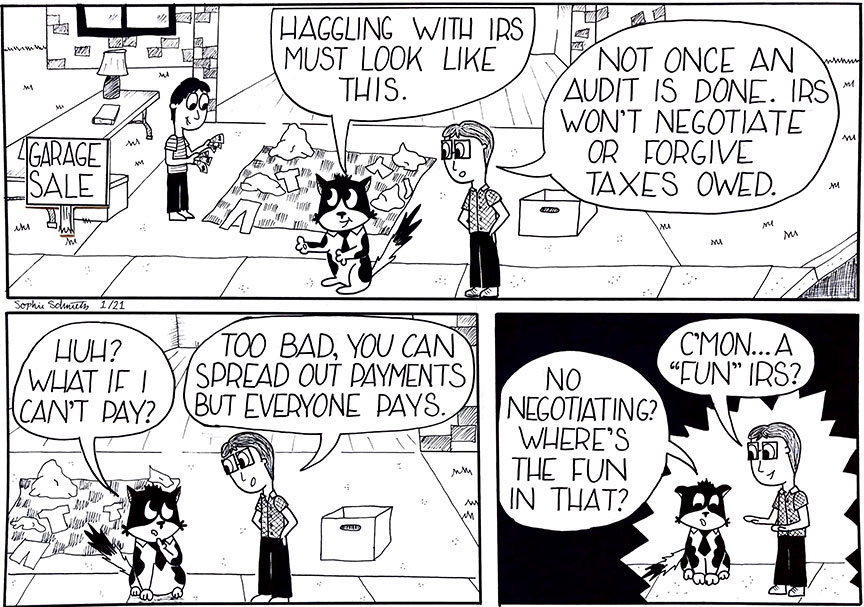 How to Reduce or Eliminate Back Taxes

(Which Installment Agreements Won’t Do)

With an Installment Agreement, you are repaying all of the tax you owe, over time. There are only two ways out of full-paying your back taxes: (1) an Offer-in-Compromise, which is granted only to elderly and permanently disabled people who will never earn money again (see the Offer-in-Compromise page for details) and (2) filing Chapter 7 Bankruptcy which will get rid of most tax debt (other than payroll tax debt which can never be forgiven) under certain, very technical circumstances (read about Chapter 7 Bankruptcy here). However, there are times when a taxpayer’s expenses are so much higher than their income that an Installment Agreement will result in a determination of “Uncollectible:” the taxpayer will pay $0/month for 18 – 30 months, until the IRS revisits their finances. This is discussed further below. In general, bankruptcy is used far more frequently to lower or get rid of tax debt than an Offer-in-Compromise.

The process for applying and qualifying for an Installment Agreement differs greatly depending on whether you owe less than $100,000 or more than that. In general, if you owe $100,000 or less in taxes, penalties and interest, then you qualify for the faster, less invasive streamlined Installment Agreement process. You qualify for certain if you owe $50,000 or less. It’s a somewhat grey zone if you owe between $50,000-$100,000 because the IRS tested increasing the limit for the streamlined process to $100,000 in recent years, but then never officially ruled that the new limit is $100,000. However, the IRS is accepting most streamlined applications up to $100,000.

There are fees associated with setting up the payment plan. If you can pay off your balance within 120 days (four months), then it won’t cost anything to set up a streamlined Installment Agreement. If you cannot pay off your balance within 120 days, then setting up a direct debit payment plan online will cost $31; setting up a direct debit payment plan by phone, mail, or in-person costs $107. If not using direct debit, but rather paying by check or credit card (for which there is an additional 2 percent fee per payment), then setting up the plan online will cost $149 and setting up the plan by phone, mail, or in-person will cost $225. Low-income taxpayers can sometimes get these set-up fees reduced or waived. And interest and penalties continue to accrue on the balance owed until it is fully repaid. Why? The IRS considers this money you owe that you didn’t pay on time – therefore, it will charge you for what it sees as your unauthorized use of its money. 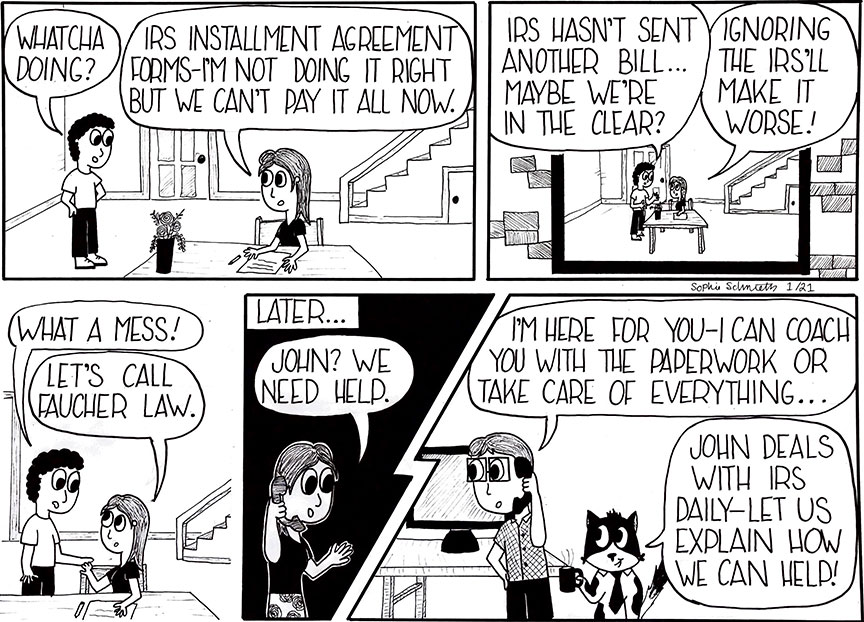 There are also cases where the IRS accepts streamlined Installment Agreements that repay nothing ($0/month) – this is called Uncollectible Status. To qualify, your basic living expenses must be greater than your take-home pay. In other words, you have no or extremely little disposable income, and thus no ability to repay the IRS. This is a temporary designation. If the IRS determines you to be uncollectible, then it will set a future date – usually in 18 months to two years – for you to resubmit earnings and expense information. The IRS wants to ensure that, if your financial fortunes improve, you begin repaying them.

If you think you qualify for a streamlined Installment Agreement, I recommend contacting me or another tax professional before submitting your application. Doing so may help avoid potentially costly mistakes: after all, we submit Installment Agreements all the time. A ten-minute chat can confirm that you’re on the right track or point to a needed correction.

A tax attorney can guide you on how to best fill out the Installment Agreement, to avoid possible denial. Give me a call. I will be able to tell you whether you’re on the right track with an Installment Agreement to deal with your business tax debt, or if there’s a better approach

The Collection Information Statement is dreaded because it requires a very complete accounting of all your debts, assets, income and expenses. Why? The IRS wants you pay as much of your disposable income as possible to your tax debt. Thus, it looks very closely at what you earn and spend to determine how much you’ll pay. Want to know what the IRS considers an “allowable” housing expense in southern California (or anywhere else)? For Los Angeles, the IRS thinks you can get housing for a family of four, including utilities, for $3,222! Check out the IRS Collection Standards guide. The good news: IRS revenue agents in southern California know the official allowable living expenses are laughable and are generally willing to be flexible. I regularly have clients who pay $5,000/month in mortgages who qualify for an Installment Agreement using their actual housing payments.

The IRS also will look closely at your assets. If you have a lot of “non-essential” assets, such as second homes, recreational vehicles and expensive cars, the IRS is likely to have you sell those to pay off your tax debt. Sounds harsh? The IRS’ (and Congress’) thinking is that your neighbors did without “luxury” items to fully pay their taxes; why should your under-payment be rewarded with the ability to buy expensive toys? In general, if you have a lot of assets and propose a short repayment plan of two years or less, the IRS revenue agent on your case is likely to let you keep those assets.

However, if you need more than two years to repay your taxes, the IRS revenue agent is likely to demand you sell those assets – it’s the government’s money, after all, sitting in that second house or Ferrari. And, if you don’t do as the IRS asks, it can take it away (click here for a discussion of IRS Tax Liens and Levies. It generally takes the IRS a few months to make a determination on your application.

There are fees associated with setting up the payment plan; they are the same as for the streamlined Installment Agreement (see “Fees” paragraph above). And interest and penalties continue to accrue on the balance owed until it is fully repaid. Why? The IRS considers this money you owe that you didn’t pay on time. Therefore, it will charge you for what it sees as your unauthorized use of its money. Also, to qualify for an Installment Agreement, you must be compliant with your taxes, meaning that you’ve filed tax returns in prior years and the current year’s taxes (withholding, estimated tax payments) are up-to-date.

Installment Agreements for tax debt above $100,000 are complex and there tends to be a lot of back and forth between the taxpayer and the IRS revenue officer on the monthly amount of the repayment (because of the discretion allowed in what constitutes basic living expenses). If you plan to submit an application yourself, I still highly recommend you contact me to discuss your application before you submit it.

Since I routinely negotiate and submit Installment Agreements, I am likely to catch problems you may not

If you owe the IRS more money than you can pay, let’s talk about your issue. Then we can devise a plan to handle the IRS in a way that gives you what you need – whether that’s reviewing an Installment Agreement you’ve filled out, a playbook on how to deal with the IRS revenue officer assigned to your case, or my stepping in on your behalf to deal with the IRS so that you don’t have to.