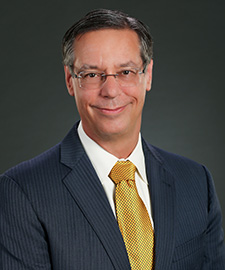 John practices tax and bankruptcy law because they offer an invigorating mix of client counseling, problem-solving, court appearances, and helping people get to the other side of difficult financial circumstances. His bankruptcy work focuses primarily on personal chapter 7 bankruptcy, small business chapters 7 & 11 bankruptcies, and bankruptcy litigation, both defense of creditors in bankruptcies and defense against creditors challenging a bankruptcy. John has particular expertise in how to discharge federal and California tax debts in bankruptcy. He also enjoys putting his prior employment at the Internal Revenue Service (IRS) to good use defending both individual and corporate taxpayers in IRS and CA tax agency (Franchise Tax Board, Board of Equalization, California Department of Tax & Fee Administration) audits and collection actions. John holds Certificates of Specialization in Bankruptcy Law and in Tax Law from the State Bar of California. These specializations are given only to attorneys passing an exam. Fewer than five percent of lawyers in California have this designation. John is a member of the California, Texas and Pennsylvania State Bar Associations.

As a former partner at Hurlbett and Faucher, LLP from 2009-2012, John guided many debtors through to successful discharges, litigated cases on behalf of and against trustees, removed liens from debtors’ properties, stopped repossessions and foreclosures, and helped debtors obtain discharges when creditors used an adversary proceeding to challenge the debtor’s discharge. At the end of 2012, John started Faucher Law. John also performed litigation and bankruptcy for large corporate clients at Eckert Seamans Cherin & Mellott in Pittsburgh, PA, and while working for Coastal Corporation, a Texas oil company facing global bankruptcy and debtor-creditor issues.

Prior to going into private practice in 2009, John worked as an attorney for the U.S. Treasury Department, IRS Division, for more than a decade. During this time, John was a special assistant U.S. Attorney representing the IRS in bankruptcy courts in Houston, Texas; Woodland Hills; and Santa Barbara. His work at IRS included review of offers in compromise, objections to chapter 13 plans, litigation over IRS claims in bankruptcy, lien, and levy collection issues including IRS seizures, and tax litigation. John has also interned for two bankruptcy judges: Judge Alan Jaroslovsky of the U.S. Bankruptcy Court for the Northern District of California (Santa Rosa), and Chief Judge Joseph Cosetti of the U.S. Bankruptcy Court for the Western District of Pennsylvania (Pittsburgh).

John was born in Charleston, West Virginia. When he was eight, his family moved to Geneva, Switzerland for his father’s job. While there, John became fluent in French, and began his quest to learn as many languages as practical. During high school in a suburb of New York City, he learned to speak the unique NYC dialect (his third language?). At Dartmouth College, John picked up German. And, while working as a reporter in California right out of college, John spent many evenings and weekends playing pick-up soccer games, thereby learning Spanish. The language he’d like to learn next is Italian. John met his wife, Karen, while at grad school; they have been married 30 years and have two daughters.

Want to Know More About John (and his Chickens?)

Why I do what I do 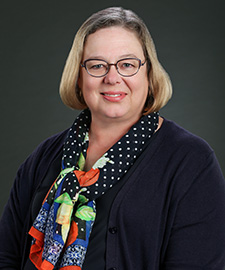 Karen is Faucher Law’s Office Manager, main paralegal, and brains behind the Newsletter. Karen is a former professor of Business Strategy (at Pepperdine and Rice Universities), having obtained her MBA and Ph.D in business from the University of California, Berkeley. She retired from academic politics and teaching nights and weekends several years ago to help John keep everything behind the scenes running smoothly.

In an odd sort of professional bookend, Karen’s first job out of Bryn Mawr College was as a paralegal for Davis, Polk & Wardwell in New York, NY. For many clients, Karen is the first person they interact with at Faucher Law, and her intelligence and compassion put people at ease. She’s also John’s wife. 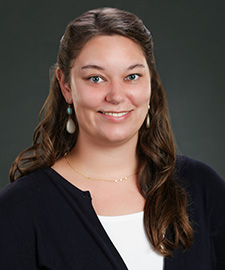 Sophie loves finding creative ways to get a message across. As a result, she’s our marketing specialist in charge of the design of Faucher Law printed materials and digital media. She’s also the talent behind the Sebatian the Feline Paralegal comic that appears in our Newsletter.

Sophie is a graduate of Rice University in Houston, TX. She served as a Peace Corps volunteer in Rwanda, Africa before joining Faucher Law.

She is also John and Karen’s daughter (it’s obviously a family business). 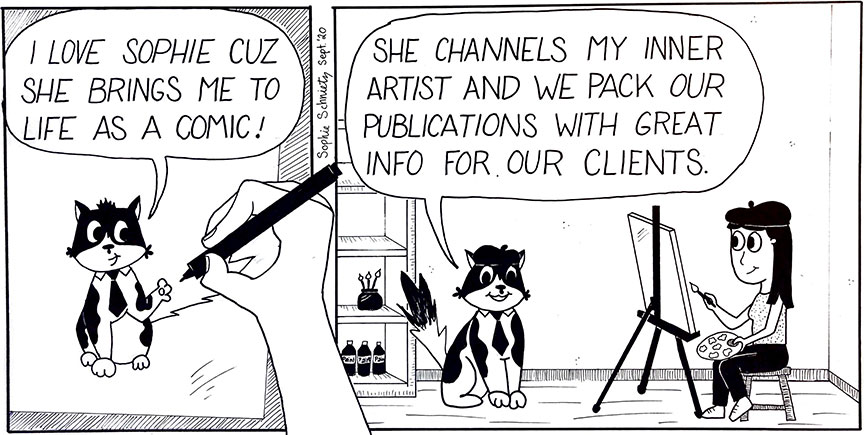 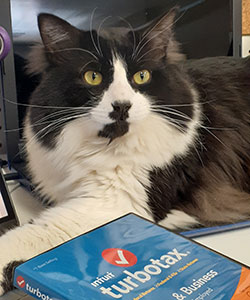 Not every attorney is lucky enough to have a great paralegal. Few are so lucky that their paralegal is both an excellent employee and a cat. A very photogenic and handsome cat. With his very own cartoon and Instagram account (sebastian.the.feline.paralegal). How on earth did a tax and bankruptcy lawyer (boring) come to have such a prominent cat (quirky)?

John’s wife and daughters have fostered cats and kittens for our local animal shelter (Agoura Hills, CA) for over a decade. They first fostered Sebastian in late 2018. He came into the shelter system as a sick stray. (Since germs and illnesses spread quickly in animal shelters, young and sick animals are taken into the homes of volunteers until they are sufficiently healthy or old enough to be adopted). 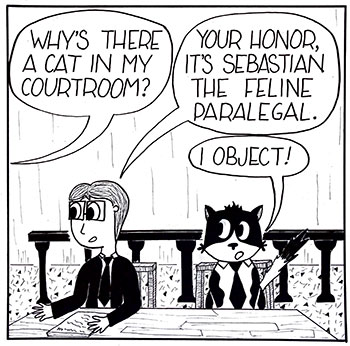 Sebastian was a great guy from the start – friendly and curious if sometimes a bit too enthusiastic with playful nips. He was about a year old when they first got him, and obviously hadn’t been taught not to play-bite or play-scratch people but we worked with him and he gradually became more socialized. They thought he was ready to find his forever home after a few months. But, when they brought Sebastian back to the shelter to be adopted, he wanted no part of it.

The shelter called Karen a few days after Sebastian returned. Sebastian had been wildly hissing and clawing since she’d dropped him off. They thought he was feral and asked us to take him back for more socialization. Feral? Not Sebastian! Sure, he was a bit “spicy,” but we’ve fostered feral cats, and Sebastian is not feral. When Karen fetched him to bring him back home, the shelter personnel were amazed he let her pick him up. Without oven mitts.

Once home, Sebastian walked in like he owned the place. Wait! Were we duped? Manipulated? By a cat? Sebastian obviously adopted us before we knew we were adopting him.

Once back here, Sebastian started showing up regularly in Faucher Law’s home office, from which John works at least half of most days. He was very interested in the computers. Then the printers. Then the scanner. Loved tinkering with them, and then settling on them for a cat-nap. Then he started giving lots of advice, usually unsolicited. And helping out with small projects, which led to bigger tasks. John finally made it official: Sebastian is a Faucher Law paralegal. Check out his mews-ings on office life on Instagram at sebastian.the.feline.paralegal. And don’t miss his comic strip in the Newsletter. Apparently, he has lots of “tough love” advice to give on tax and bankruptcy matters. All vetted by John first, of course. 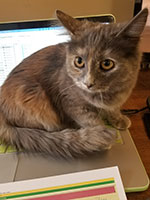 At the end of 2019, Karen and John fostered a kitten born with a hole in her heart. Because she needed more medical care and observation than most foster kittens, she also stayed with them for several months (see Newsletter feature). 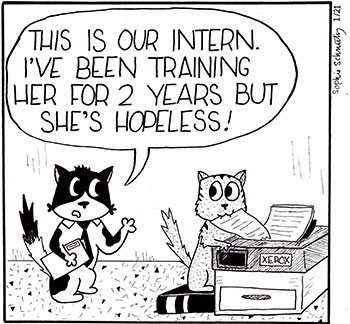 By the time she was cleared by the vet for adoption, she had thoroughly integrated herself into the family, particularly with Sebastian and their other cat. She and Sebastian often nap on the office printer together. Who could separate them? Anyway, they made it official and adopted the small cat you sometimes see on Sebastian’s Instagram account, and who he refers to as The Intern.

Her real name, however, is Tuna. She doesn’t have her own Instagram account. Yet. But she’s lobbying for one…. Or should we say fishing for one?