A federal tax lien notice is a public document telling the world that you, the taxpayer, owe taxes. It creates a debt against your property; if there is a valid tax lien filed, you cannot sell this asset without first paying off the tax lien. An IRS lien can be attached to any of your assets such as houses, vehicles and even business property. A federal tax levy, on the other hand, is the legal seizure by the IRS of your property to pay tax debt. The IRS has the right to levy on property you own or have an interest in, including: wages, bank accounts, retirement accounts, rental income, licenses, dividends, commissions, accounts receivable, houses, cars and boats. Liens sit there. Levies take things.

The most common tax levy is Wage Garnishment. This is a collection practice in which the IRS notifies your employer that a portion of your earnings will be sent directly to the IRS to pay back taxes. Employers do not have a choice in complying with an IRS wage garnishment. It is a legal order they must follow, or risk being fined. While the IRS does not need a court order to garnish your wages, garnishment never occurs before the IRS has communicated with you and asked for payment.

Please note: the IRS will never phone or email first. It only communicates via U.S. postal mail to your most recent address. If you receive a phone call or an email claiming you owe back taxes and that the IRS will levy unless you pay them or reveal identifying information, it is a scam. Here are other common scams involving fake IRS representatives. Do not give anyone personal or financial information who calls or emails claiming to be the IRS. The IRS knows you and your personal information; they will never ask for your social security number, for instance. They already have it. And the IRS will only communicate via U.S. mail with you initially; phone calls with the IRS only occur long after it has first made mail contact on your matter. 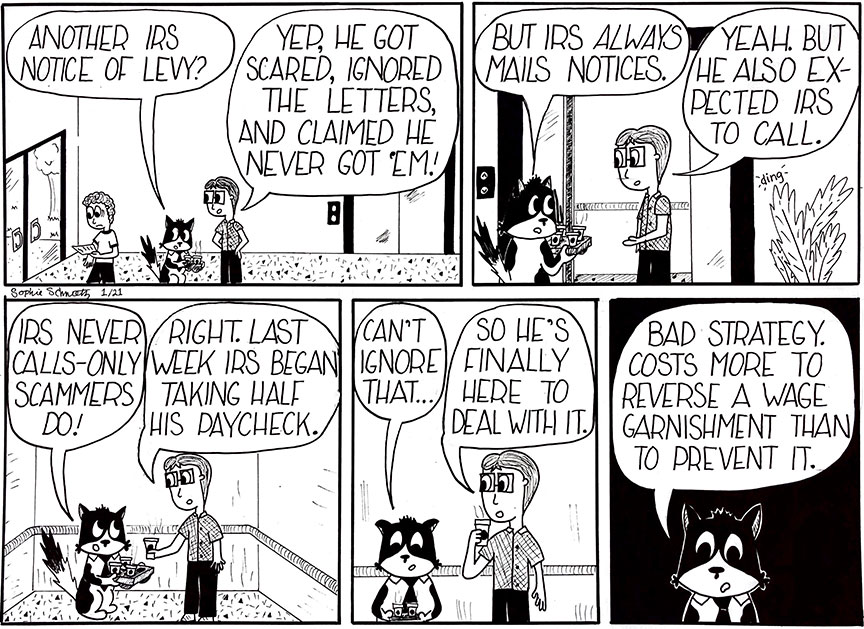 The amount of earnings the IRS takes in a wage garnishment is determined by a complicated formula that sets the amount of your income that is exempt from garnishment. The non-exempt portion of your wages can be claimed entirely by the IRS. Very roughly, the exemptions are as follows: about $12,000 annually if you are single with no dependents; about $27,000 annually if you are a head of household with two dependents; about $33,000 if you are a married couple with two dependents. If you want to really get into the weeds, check out this IRS table.

Once begun, a wage garnishment will continue until the tax debt is paid, or unless: (1) the IRS accepts an Installment Agreement payment plan (learn more here); (2) you file for an Offer-in-Compromise (learn more here); (3) you file for bankruptcy (learn more here) or (4) you can prove that the garnishment is causing financial hardship. However, the rule-of-thumb is that once a wage garnishment has begun, it is difficult to reverse. This is one of many reasons to respond to the many IRS notices that will be mailed to you before a garnishment occurs! If you are too intimidated or scared to do so yourself, contact me and I’ll walk you through the process. The IRS is intimidating to deal with but much worse is the IRS taking most of your wages when you cannot afford to repay at the rate they are garnishing.

Before the IRS garnishes wages, it will send at least three notices to your most recent mailing address. Again, the IRS will never call you first! Also, keep in mind that the demands for payment from the IRS will not occur if you are still actively disputing an audit or an IRS change in a tax assessment. The notices discussed below are sent after an audit or tax court case is finished and the final tax has been assessed, and you’ve ignored all the earlier notices the Assessment division of the IRS sent to you, notifying you of a change to the amount of tax owed or of an audit.

The first notice the Collections division of the IRS will send is a demand for payment with Form CP14, CP501 or CP503. Second, the IRS issues a Notice of Intent to Levy with Form CP504. You can read more about understanding your CP504 Notice here. Please notice the section on page 3 of Form CP504 about Revocation of U.S. Passport: if you owe more than $52,000 in taxes, the IRS informs the State Department, which will either revoke your existing passport or refuse to issue a new passport or renew a lapsed passport until your tax debt is paid. Would the government really do this? Yes, I’ve seen it dozens of times. The government’s thinking is that you shouldn’t be paying for foreign travel when you owe it taxes. They probably have a good point. Finally, if none of the above notices catch the taxpayer’s attention and cause them to either pay or contact the IRS about payment plans, the IRS will issue a Notice of Right to a Hearing for Due Process Collection with Letter 1058.

The IRS generally begins a garnishment about two weeks after the deadline for requesting a due process hearing has elapsed. However, contacting the IRS and attempting to work out payment with an Installment Agreement always delays a garnishment. Click to learn more about Installment Agreements; The IRS will not garnish the wages of anyone making a good faith effort to pay taxes owed. This is one of many, many reasons why it’s NEVER a good idea to ignore IRS notices! Yes, it’s scary and intimidating to receive these notices, but ignoring them will not make the problem go away – it will make the problem WORSE. If you’ve received any of these notices, please call me. I have too many clients who have hoped the IRS would magically forget about them; they wait so long to call me that the problem is far harder and more expensive to address than if they’d called when the IRS first began issuing notices. Call me, call another tax professional, or call the IRS yourself – but CALL SOMEONE!

A tax lien is a passive way for the IRS or California’s Franchise Tax Board (“FTB”) to get paid. You own a house and owe taxes; the IRS files a notice of tax lien; nothing changes in your life. Nothing changes, that is, until you try to sell the house. There may be other issues: business partners checking on your credit may do a double take, for instance, because a notice of federal tax lien is a public document telling the world how much tax you owe. The point of a notice of federal tax lien is that the IRS insists on being paid eventually. The taxpayer owes the money, the IRS has the legal duty to collect the tax, and the world now knows it. Click here for more information of the timing of IRS filings of lien notices.

Can IRS Tax Liens Be Negotiated Away?

People often ask if I can convince the IRS that the taxpayer’s business is hurt by the lien filing, and it should therefore release the lien and accept a payment plan? Generally, the answer is no. I can only negotiate a lien away when the taxpayer pays it off, or if I can prove that the lien doesn’t legally belong on the property. There is a process for discharging, releasing, or subordinating tax liens, but the IRS will not agree to any of these modifications if doing so puts it in a worse position. Think of a moray eel biting someone’s hand; the eel won’t let go. Neither will the IRS. It doesn’t care if the lien jeopardizes the business’ ability to make the money to repay.

At this point in the collection process, the Collections division of the IRS only cares about the equal application of the law. If a business owner (or individual) has gotten to the point of having liens filed against its business (or an individual having liens filed against their house), rather than paying or setting up an installment agreement with the IRS, then the IRS is done with negotiations. The IRS now regards the business (or individual) as a criminal enterprise (it has, after all, violated its duty to pay its taxes) and the IRS will put liens on any assets it can to satisfy the tax debt. The IRS is legally mandated (by Congress) to treat every taxpayer equally in its attempts to collect back taxes. Individually negotiated deals and exceptions are not allowed. Period. If they were, then the legally well-connected would be able to get all sorts of special deals unavailable to less sophisticated Americans. That’s fundamentally unfair and thus the IRS has been ordered by Congress to apply the collection tactic exactly the same to every taxpayer, and not to cut side-deals. 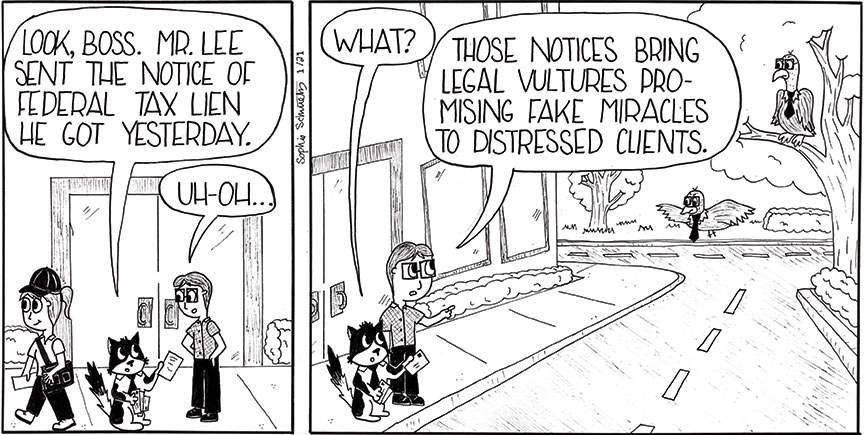 A tax lien is also a marketing opportunity for unscrupulous law firms and accountants. Once a notice of federal tax lien hits the county recorder’s office, it becomes public and dozens of firms will send offers to “help” you. They generally offer to settle the lien at pennies on the lien’s stated value. For example, say you owe $20,000 (and the vultures know the exact amount because it’s public record). The vultures promise they can get the IRS to settle for much less, say $5,000. Of course, the vultures will charge you thousands of dollars to begin their “work”. But they will never deliver, and you won’t get your money back. Should you hire one of these companies? No. Because the promise they can get the IRS to settle for less is a lie. Don’t believe me? Type in the name of any of the firms that floods airwaves with ads promising to settle for pennies on the dollar and see the dozens of complaints that come up.

Tax Liens cannot be negotiated away. The taxpayer owes the money, and the IRS has the legal duty and the legal authority to collect the full tax. There are only two ways to get rid of tax liens. First, pay off what you owe – all of it. Not 95 percent. All of it. Why? Because the IRS and the FTB have the legal authority to keep coming after every asset you own, attach liens, and get paid until all of what you owe is paid. Plus, they have a legal mandate to do this for every tax debt. The second, and only other way to get rid of a tax lien is if you can prove that the lien doesn’t legally belong on the property. This is very rare.

So, if some vulture approaches you and says they can horse-trade with the IRS and get it to drop a tax lien or negotiate it down, remember that this offer is appealing to your hope (I really want to owe less than I do), not to reality (the IRS can and will enforce the full amount of tax liens). Don’t pay someone who promises to do what cannot and is not done. If you get an offer that seems too good to be true, call me or another reputable tax professional to take a look at it first. It never hurts to get a second opinion before spending a lot of money. 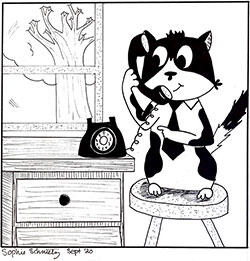